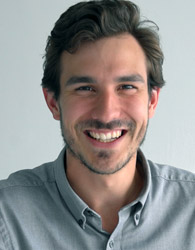 Senior structural engineer Ashley Thomas joined Whitby Wood soon after its founding in 2016. He is a skilled organiser, problem solver and collaborative team leader, who relishes the sense of achievement that comes with seeing a well-resolved building completed and in use.

He has over six years’ experience in the design and delivery of complex projects, large and small — including the four-tower residential scheme Taberner House in London, for which he is lead engineer. The project incorporates a partially retained and adapted two-storey basement below high rise structures ranging from 13 to 35 storeys.

Ashley also worked as lead structural engineer for several medium rise buildings in the King’s Cross development area — some of which are sited over existing rail tunnels — and has joint-managed multi-disciplinary teams on many projects, including in India.

Cheery and relaxed, Ashley nevertheless likes a challenge. Away from his desk, he enjoys rock climbing and hiking. In 2018, tutored Central St Martins architecture students on technical aspects of buildings, and he has used his in-depth technical expertise to write practice guidance notes on concrete frame buildings and to analyse complex shapes susceptible to vibration. He is also keen on using the latest technologies, reviewing and monitoring engineering design processes for opportunities for improvement.