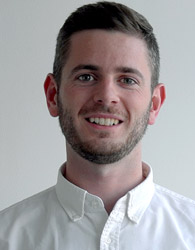 Elliott Connolly joined Whitby Wood at the practice’s founding in 2016. He is an associate director, and structural engineer with a great instinct for collaborative leadership, and has been working on complex projects in the UK and internationally for more than seven years.

Trained in Cardiff, where he combined a love for maths, physics and art in an engineering course that included architecture, he joined Ramboll UK as a graduate in 2011. His passion for sustainable built environment solutions was deepened by his work helping deliver a sustainable flood relief development project in Bangladesh. While in India on a seven month secondment, he worked on the Al Rayyan Stadium project which will feature in the FIFA 2022 World Cup in Qatar — designing long span steel trusses for the main stadium and enclosed training pitches.

It’s the combination of organisation, creative problem solving and collaborative interaction that glues him to structural engineering as a profession. And all of these will play no small part in his next challenge — taking a leading role in the delivery of the engineering for London’s Greenwich Peninsula Design District, with its 16 buildings by eight different architects.

Elliott is a confident communicator and experienced team manager. He also loves sketching, and his entry in the 2017 Engineering Club sketches competition was highly commended.